Happy New Year everyone!
I must apologize for my tardiness. The blog schedule got a bit wonky and this was supposed to be the New Year's Day post (the whole healthy eating thing... blah blah blah). Anyhow, it's here now and that's all that really matters, so grab a saucepan and cozy up to the stove.
There are few things I like better on a snowy New England morning than a bowl of oatmeal and a mug of hot cocoa. That's what I call comfort food. But I'm not crazy about plain oatmeal and I'm not a fan of the instant stuff.
Regardless of how it's prepared, I try to have oatmeal at least one morning each week because I figure it offsets my love of eggs for breakfast, which I try to limit to one morning each week. Makes sense, right? So I experiment.
A couple of months ago, I threw this together and my first reaction was, "I need to write this one down!" 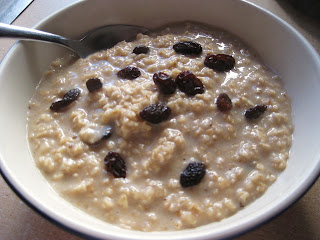 Auntie's Oatmeal for Two
1 cup milk
3/4 cup water
1 Tbsp dark brown sugar
1/8 tsp nutmeg
1/4 tsp cinnamon
dash of salt
1 cup rolled oats (quick cooking, not instant)
1 Tbsp maple syrup
1/4 cup raisins (optional)
Bring milk and water to a boil in a 1 quart saucepan
Lower heat and add brown sugar, nutmeg, cinnamon, and salt
Stir until sugar is dissolved
Add oats and cook over low heat for about 1 minute
Add maple syrup and raisins, stir
Remove from heat and let stand for a minute or two to thicken
Yield 2 servings
The Usual Notes:
To double or triple the recipe, no additional instructions are necessary.
If you only have light brown sugar, then use it. I just prefer the dark.
When it comes to cinnamon, less is more. I once accidentally added a bit too much and POW! That'll wake you up for sure.
Don't skip the salt. Trust me on this one. It's just a tiny amount, but it makes a huge difference in the flavor.
If you buy your raisins in the single-serve boxes for the kids, one box is the perfect size for this.
Don't go crazy looking for top quality maple syrup. That cheap imitation pancake syrup works just fine. In fact, given the choice between the two, I'd save to good stuff for waffles and pancakes.
Yes! You can reheat this if you find you have leftovers. Simply reheat in the microwave but stir in about a tablespoon of milk per serving first.

Variations:
When I don't have raisins on hand, I like to slice banana over the top instead.
For apple cinnamon oatmeal, omit the maple syrup and cut down or omit the raisins. Replace them with about 1/2 cup of applesauce. (I love to do this in the fall when we have tons of homemade applesauce, but the stuff in the jar works just as well.)
By the way, I won't tolerate whining that you don't have time to make this in the morning. It takes less time than brewing a pot of coffee. Set your ingredients (except for your milk) on the counter the night before so you're ready to go.

Rise and shine!
Posted by Laurie Laliberte at 10:00 AM