Tony Acree and The Hand of God

Hey all! My pal Tony Acree and I have been talking about this book for months and it's finally here. Unfortunately, I have not had the opportunity to read it yet, but I thought you'd all like to see something on my blog this week that did not involve spending hours in the kitchen. Although, you could hang out next to the crock pot as you read his new book. I kid. Many thanks, and welcome, Tony!

My thanks to Laurie for letting me stop by and share with folks the inspiration for my debut novel, The Hand of God.

One of my favorite songs when I was a kid was “The Devil Went Down to Georgia” by Charlie Daniels. In the song, the Devil offers Johnny a fiddle of gold against his soul if he can win a fiddle contest. Johnny accepts and of course kicks Satan’s ever lovin’ ass. While I love the song, I always thought there would be no way I would have made the same decision. After all, if Satan is real, then God is real, and why risk eternal damnation for something you won’t get to keep when you die? Which led me to wonder, for what would I risk my soul?

This is the theme I explore in my debut novel, The Hand of God. Bounty hunter Victor McCain couldn’t have cared less about God and spent a lot more time thinking about beer and sex than he did his everlasting soul. That is, until the day Satan walked into his office and wanted to hire him to do a job. For Victor, this was an easy choice: not just no, but hell no. But then the Devil made Vic an offer he dared not refuse. 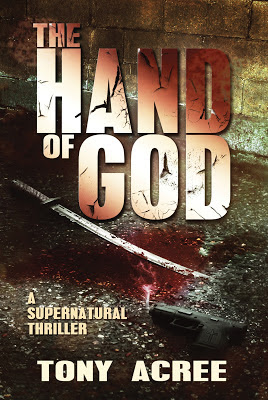 His brother Mikey, one of Louisville’s wealthiest businessmen, had climbed the ladder of success by selling his soul. And in twenty-four hours he would die and spend eternity in Hell, unless Vic agreed to track down a woman Satan desperately wanted found. After Victor reluctantly agrees he finds he is faced with choice after choice which shoves him further over the line of putting his own soul at risk, just to try and save the soul of his brother.

What would you do to save someone you loved from eternal damnation? While writing the book I asked for, and got, a lot of replies to this question. Some would risk everything to save the ones they love. Others say you have to let each individual make the choice and live, or suffer, as the case may be, with the consequences. As for me? I would like to think I’d be willing to push the limits. But give up my own soul? I’m not so sure.

You can buy the book, published by Hydra Publications, in both Kindle and print format on Amazon and  in ePub format on Smashwords.
Posted by Laurie Laliberte at 8:00 AM