I Keep Promising This One, So Here it Is!

Since I moved to Oklahoma City, almost three years ago, I've lived with so many roommates I can't even remember them all. Anyhow, once or twice, I've been lucky enough to encounter one who can teach me something new in the kitchen. John was one such person. He'd worked in kitchens, as had his wife, Tascha, and they made a hamburger mix to die for.

You see, before I met this duo, I never really put any thought into experimenting with ground beef patties. My burgers were plain, just meat with maybe a sprinkle of salt and pepper during cooking. I dare say, I have become much more adventurous. Unfortunately, the mix of seasonings John used in his burgers was identical to the one he used for chicken and pork. Eventually, the whole house became very tired of his cooking. No matter how good it tasted, we'd gotten to the point that we preferred a plain bologna sandwich over John's everything-tastes-identical cooking.

The recipe I'm sharing with you today came to be out of necessity. My current roommate and I were both craving John's jalapeno burgers, or a reasonable facsimile thereof. (I don't think we'll ever crave that particular blend again.) So I hit the freezer. All we had was one pound of 90/10 ground beef, not enough for leftovers, and far too dry for decent burgers. My solution? Raid the freezer again and punt.

We both enjoyed our dinner so much that I immediately wrote down the recipe so I wouldn't forget it. But then, isn't that the way many of our favorite recipes come to be? 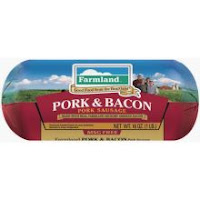 
1 lb. pork and bacon breakfast sausage (the kind that comes in a roll, not in links)
1 1/2 med jalapenos, chopped (or substitute about 2t of sriracha)
1/2 med yellow onion, chopped
1 T granulated garlic
salt and pepper to taste

In a large bowl, combine all ingredients (do not overmix or your burgers will fall apart during cooking)
Form into 8 balls* about 1/4 lb. each, and let rest in refrigerator for about 30 minutes
Place in very hot pan
After about 1 to 1 1/2 minutes, flatten into patties* and continue to cook until they've reached desired doneness
Dress as desired

*If you're grilling, form them into patties, not balls and do not flatten during cooking

Happy Cooking!
Posted by Laurie Laliberte at 8:00 AM